Originally from Pittsburgh, PA, Val is now an Austin, TX based artist by way of.....everywhere!
Val has traveled to 36 states and 14 international destinations as a performer and creative.

Val is a skilled Director, Choreographer, Producer, Arts Educator, and Arts Management Professional who has performed in concert and as a theater artist Off-Broadway, in Regional Theaters, on tour, and abroad.

Val's Work as a Recording Artist Spans Singing to Voiceover and includes work on albums such as Broadway's "Carols for A Cure", various children's books, and her favorite project: Songs For Young Whippersnappers! She is also a children’s book author with her book “Dilber the Cranky Banana” available on Amazon.

Val is also a passionate advocate of Music Therapy, having served on the advisory board of Sing For Your Seniors (www.Singforyourseniors.org) and worked to create partnerships with Senior Centers, Nursing Homes, and VA hospitals in New York City, Pittsburgh, and beyond through various organizations. 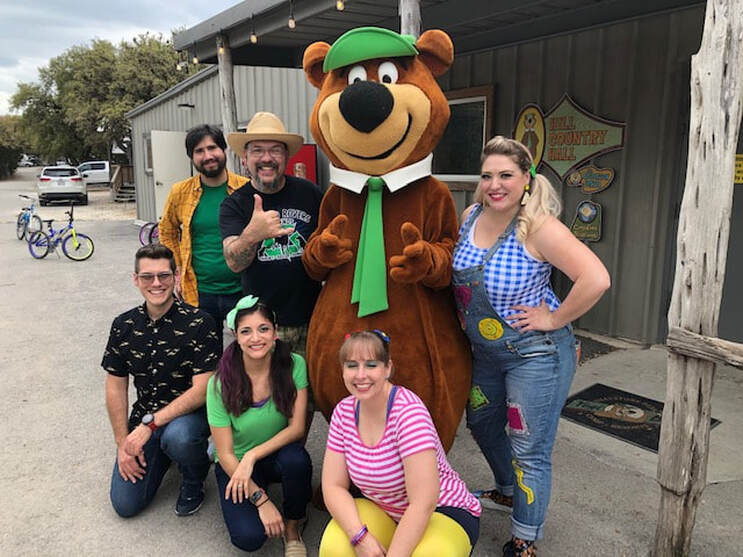 Ask us about our Live Band Show!

Photo taken at Yogi Bear's Jellystone Hill Country Campground and Resort, TX
Originally from South Carolina, Leigh is a graduate of New York City’s “American Musical and Dramatic Academy” (AMDA) and holds a BFA in Musical Theatre from The New School in Manhattan. Leigh is an actor, singer, director, and teacher, She is thrilled to be involved with Songs for Young Whippersnappers and Vintageous Productions! Favorite theatrical roles include: Audrey in Little Shop of Horrors (Tex-Arts, Directed by Val Williams), Patsy Cline in Always, Patsy Cline and Annelle in Steel Magnolias. She has previously worked with off-Broadway theatre company En Garde Arts as well as Broadway Teaching Group in New York City
​

A Texas native, Sarah has been seen on stages across Austin and beyond. Some of her favorite professional theater roles have been Susan in TexARTS production of Wait Until Dark, Barbarina in Austin Opera's production of Le Nozze di Figaro, and Sarah in Austin Playhouse's production of Guys and Dolls.
Sarah earned a BFA in Musical Theatre from The University of Arizona. She also holds a post-baccalaureate certification to teach all level Theatre Arts at the University of Texas. Never satisfied, she went on to work towards a Masters of Music in Vocal Performance at Texas State University with her esteemed teacher
Cheryl Parrish.  In addition to her consulting work with high school and junior high students in the areas of acting, voice, & choreography for choral and theatre productions, Sarah is also a certified Music Together teacher and has taught preschool and family music for nearly 8 years.
Sarah is also a member of Vintageous Productions’ Retro Vocal Trio: The Vintage Dreams
Bethany is a graduate of Texas State University-San Marcos with a BFA in theatre. Bethany worked for Walt Disney World as a Character Entertainer before settling in Austin full time. Bethany has been a company member with Pollyanna Theatre Company of Austin for 10+ years, performing new plays for children from 18 months through middle school! When she's not on stage, she shows off her great city as a LIVE tour guide!

ASSISTANT PERFORMER
​​Veronica DeSantos Ryan is delighted to bring song and dance into the lives of children with the Songs for Young Whippersnappers crew. She has been performing in various ways since the age of ten, and can often be seen on stage at the Georgetown Palace Theatre in Georgetown, TX where she is also a teaching artist. Veronica has a degree in Journalism from Ohio University with specializations in English, Music, Theatre, and Dance. Veronica has had the privilege of music directing The Little Mermaid for Harlingen High School South, as well as spending a summer teaching music with the Summer on Stage daytime performance camp for HCISD.  On the writing side, she is a contributing writer for Austin Moms Blog and has been featured in Chicken Soup for the Soul: Miracles and More. Veronica is also a member of Vintageous Productions’ Retro Vocal Trio The Vintage Dreams!